(From the "History of Temple" book authored by B.W. Holder 1982 with embellishments and updated from 1982-2019 by Mike Kinney)
Painting of 1904 Temple Model School  by Jean Wilkins 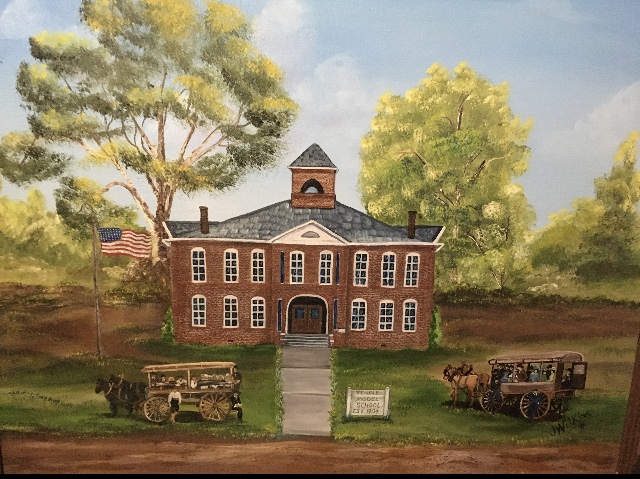 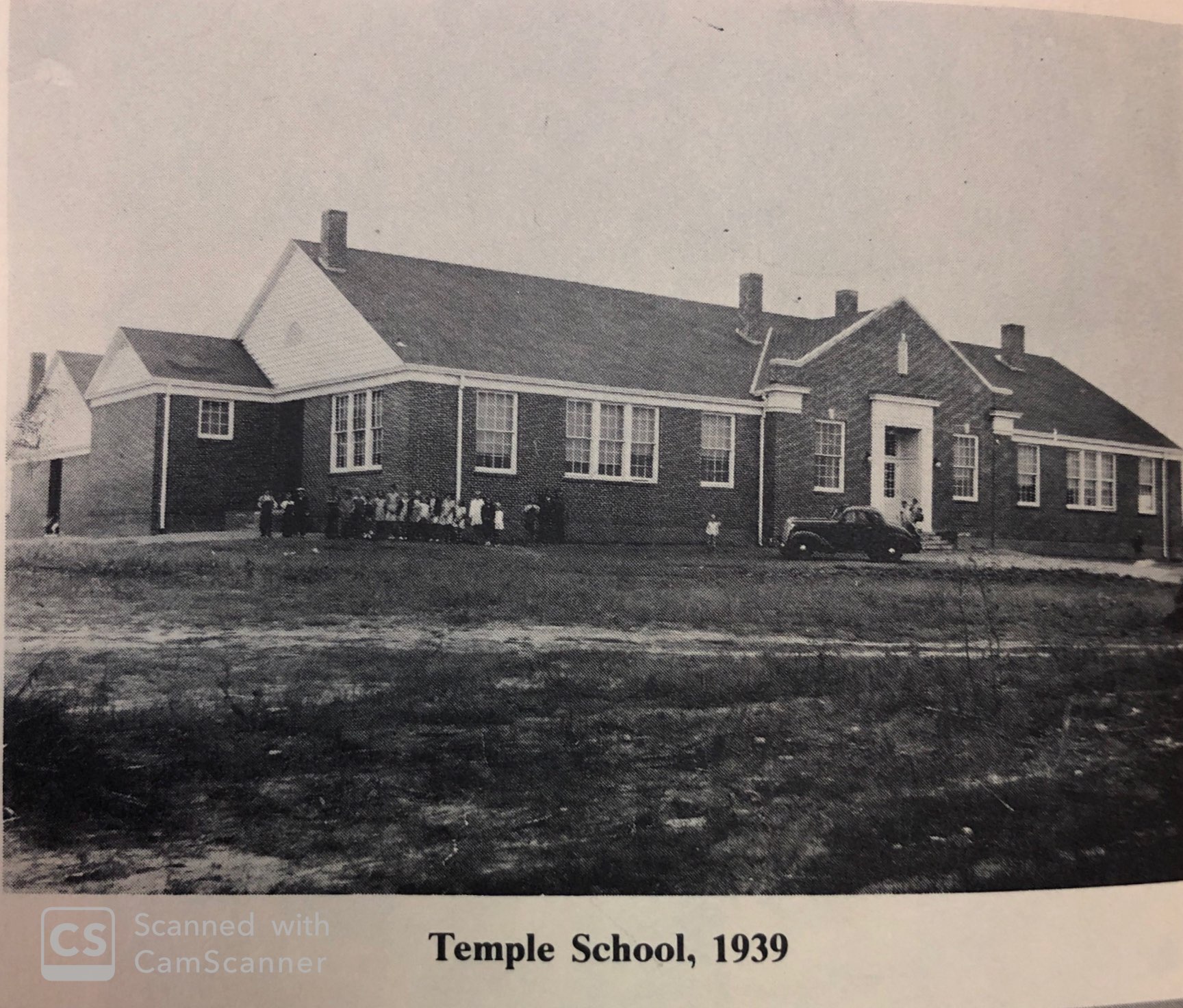 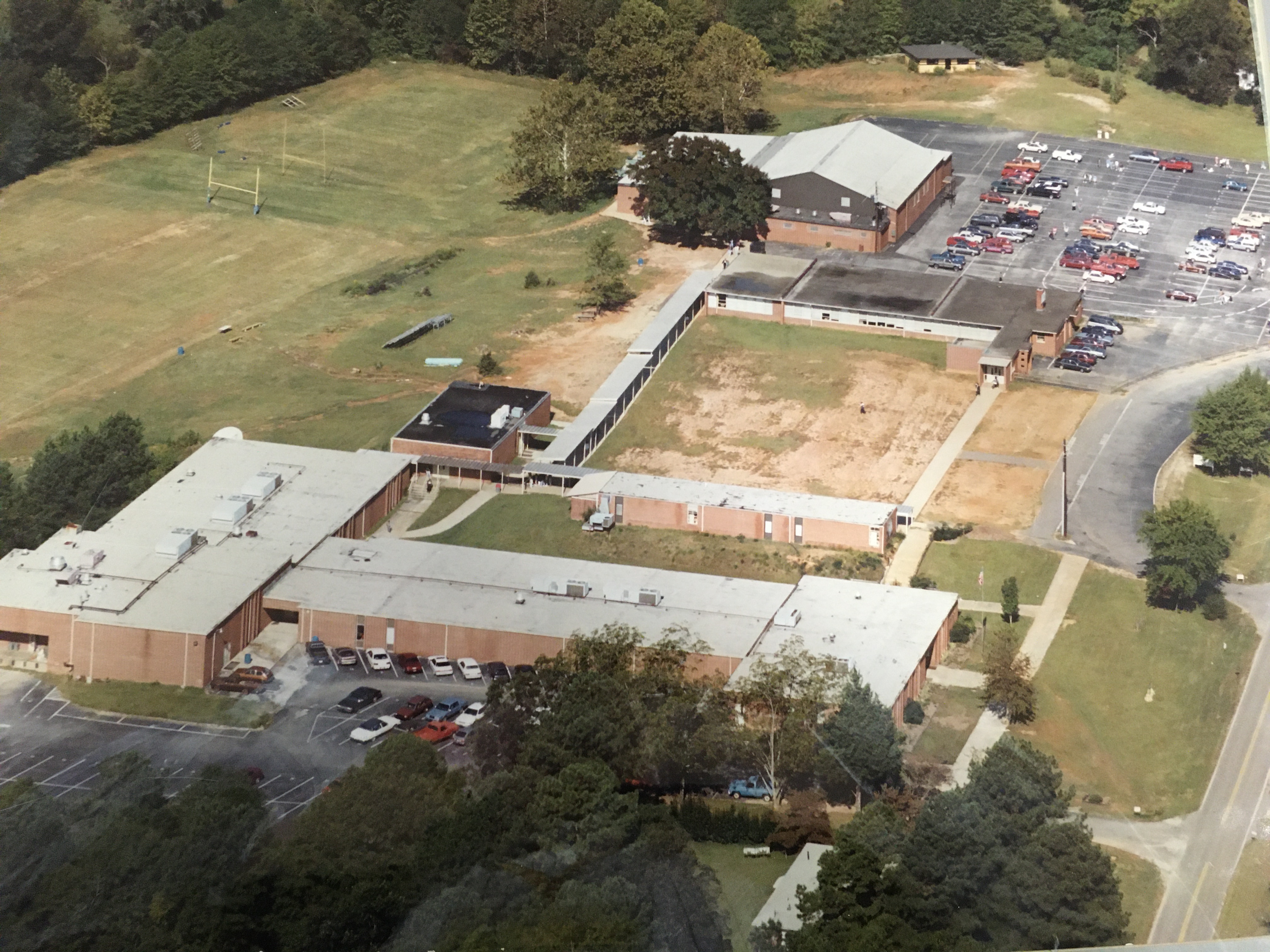 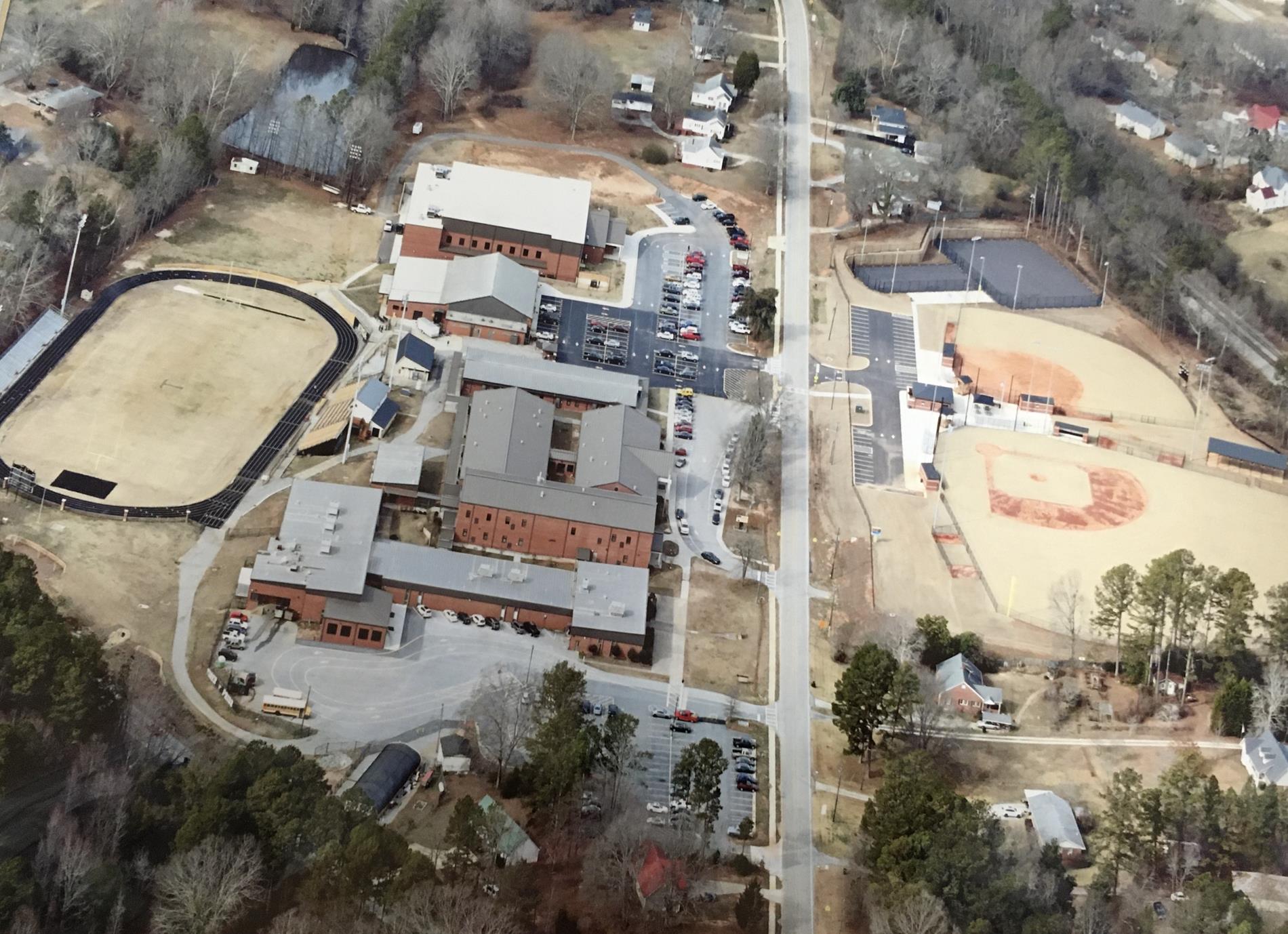 Temple Model School, a brick two story building, was built in 1904 at the corner of James and Griffin streets.  It was ahead of its time.  Besides teaching the "three R's (reading, writing, and arithmetic)", Temple Model School prepared students for farming, college, and teaching at other schools as well.  The first graduating class was 1905.  Its school transportation system was the first in the state (nation?).  The buses were mule and horse drawn wagons with covered tops and side curtains.  According to the 1968 yearbook, the Model School is also thought to have had the first hot lunch program in the State. Hot lunches were prepared in the canning plant and brought to the school by volunteer mothers. Agricultural and homemaking education began at Temple and received state wide endorsement in 1906. This happened when the law was passed establishing eleven congressional district agricultural and mechanical schools in the state.  In 1914 the school became known as Temple Public School and returned to the traditional "three R's".The first graduating class to wear caps and gowns during graduation was the class of 1936.

Georgia High School Association (GHSA) was founded in Temple: In 1903, Dr. Joseph S. Stewart came to the University of Georgia to work with the schools of the State. In 1904, GHSA, in cooperation with the schoolmen in West Georgia, was formed in Temple, Georgia. The present program has been developed over the years by secondary school administrators who realize the need for regulations in the constantly growing area of high school activities.

In 1939 Temple School was moved to its present location of 589 Sage Street. The new brick building contained classrooms, science labs, home economics facilities, a library, and a large auditorium which held school assemblies and plays, as well as community plays, operettas, graduations, country music shows, and other community gatherings. Temple School was the center of community activity.

In 1948 the first gym was built.  It was an Army building donated by Fort Oglethorpe. THS students and men from the community disassembled the building at Fort Oglethorpe, moved it to Temple, and reassembled it on the school campus.

In 1959 Elementary rooms were added which are now called the 500 building.  Then a new gym was built in 1960.  That gym is called "Stitcher Gymnasium" in honor of Donald Stitcher who was the first coach in the new gym and coached boys and girls basketball for 30 years.  When he retired he had the best win/loss record in the State and coached the 1978 girls State Championship team.

Providence Elementary School on Otis Street was a segregated school until a total desegregation plan was put into effect in the fall of 1968. That school became Temple Primary for all first and second graders. The elementary and high school on East Sage Street accommodated all students in grades three through twelve. In 1974 the voters of the county passed a bond referendum for an extensive building program. The next new Temple High school was completed in the fall of 1976.  That building is now called the 100 building.

Temple Middle School and the new Providence Elementary School were built in the early 2000's on Rainey Road and now all the buildings on the Sage Street campus are for grades 9-12.

In 1989 THS started the first football team with home games being played at other schools.  Mr. Denzil Rogers,  the principal at that time, organized the effort to build our own football field and stadium.  Parents and community members actually did most of the work, driving dump trucks and tractors.  Used bleachers were purchased and delivered to our campus to be used in the stadium.  The stadium is named after Mr. Denzil Rogers.

The original 1939 building was torn down in the 1980's or 1990's and in 2003 another new building was constructed which is referred to as the 400 building.  That building contains the main offices, media center (library), classrooms, and science labs.

In 2008 a two story building was constructed and called the "9th Grade Academy".  Its intent was to house the incoming freshmen as they transitioned from middle school to the rigors of high school.  It is now referred to as the 200/300 building and is used by all high school students.  It also houses the counselors' (guidance) suite.

In 2012 we had another building program in which the newest gym (now called simply "The New Gym") was constructed. Soon thereafter, houses across the street were purchased and removed and a new baseball field, softball field, and tennis courts were constructed.